Posted on September 2, 2016 by Nicola Meighan 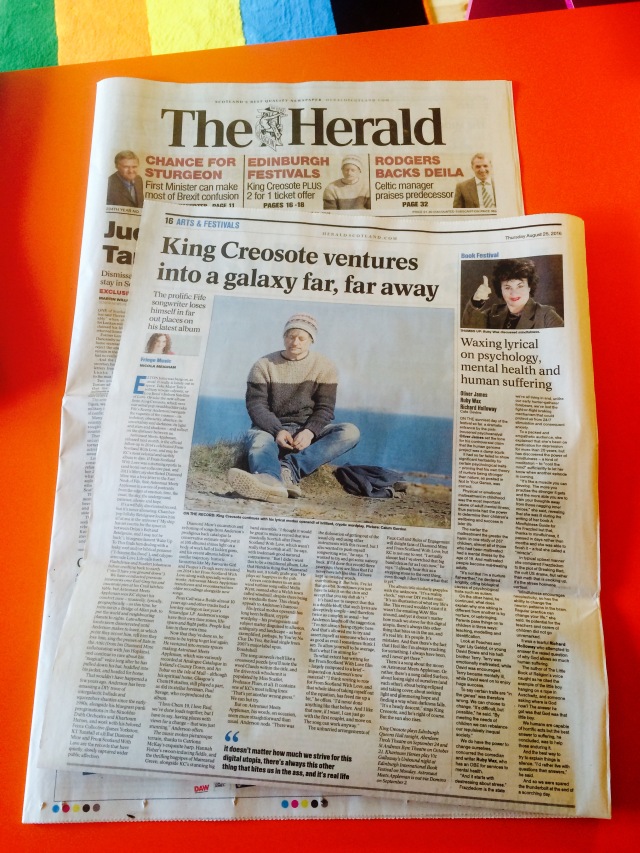 This feature originally ran in The Herald Newspaper (Scotland) on August 25, 2016.

Elton John was bang on, as usual. It really is lonely out in space. Take Major Tom’s solitary tin-can odyssey, or Lou Reed’s forlorn Satellite of Love. Or take the new album from King Creosote, which sees our astral pop swashbuckler, aka Fife’s Kenny Anderson, navigate the vagaries of the cosmos – its isolation, obscurity, absence; its uncertainty and darkness; its light and stars and shadows – and reflect upon the distance between us.

Astronaut Meets Appleman, released next month, is the official follow-up to 2014’s celebrated From Scotland With Love, and may be KC’s most celestial and earthly album to date. If From Scotland With Love was a stunning epistle to (and from) our collective past, and 2011’s Mercury-shortlisted Diamond Mine was a love letter to the East Neuk of Fife, then Astronaut Meets Appleman is a series of postcards from the edges – of emotion, time, the coast, the sky, the underground, patience, silence and hope.

It’s a wilfully disoriented record, but it’s never alienating. Chamber-pop lullaby Betelgeuse locates him all at sea in the universe (“My ship has set course for the space in between Orion’s Belt and Betelgeuse, and I may not back”), bluegrass lament Wake Up To This finds him dealing with a leaky roof and / or biblical penance (“I deserve the flood”), and calypso serenade Love Life calls forth Flashdance and Scarlett Johansson before crashing back to earth (“she’ll have you ground down”).

We usually meet at Anderson’s house, do interviews over Earl Grey tea and macaroni pies at his Crail kitchen table. But Astronaut Meets Appleman sees KC depart his comfort zone – musically, lyrically, geographically – so this time, he journeys to the Central Belt. We meet in a Bridge of Allan pub, put the world and neighbouring planets to rights, surrounded by late-afternoon locals, two dogs, and a handful of men in their sixties who seem disinterested until Anderson makes to leave – at which point they accost him, tell him they love him, sing the praises of Bats in the Attic (from his Diamond Mine collaboration with Jon Hopkins), and continue to rave about his “magical” voice long after he has pulled down his hat, huddled into his jacket, and headed for home.

That wouldn’t have happened a few years ago. Anderson has been amassing a DIY trove of intergalactic ballads and squeezebox shanties since the early 90s – not to mention his bluegrass punk peregrinations in the Skuobhie Dubh Orchestra and Khartoum Heroes, his beloved Fence Collective cabal (James Yorkston, KT Tunstall et al), and a mid-2000s major-label deal with Warners – but Diamond Mine and From Scotland With Love are the records that have quietly, slowly captured wider public affection.

Diamond Mine’s excavation and re-honing of songs from Anderson’s prodigious back catalogue (a conservative estimate might put it at 100 albums) shines light on a timeless body of work full of hidden gems, and his recent albums follow a similar trajectory: historic favourites like My Favourite Girl and Pauper’s Dough were revisited on 2014’s hit From Scotland With Love along with original specially written works, and Astronaut Meets Appleman transforms and re-contextualises older recordings alongside new songs. Stunning orchestral-pop hymn Faux Call was a b-side almost 10 years ago; several tracks had a low-key outing on last year’s Smavulgar LP. Anderson’s songs seem to have their own time zones, life-spans and circuitous flight paths. People find him in their own time.

Now that they’ve done so, he seems to be trying to get lost again. He ventured into remote spaces making Astronaut Meets Appleman, which was variously recorded at Analogue Catalogue in Ireland’s County Down, and An Tobar on the Isle of Mull – although his spiritual home, Glasgow’s Chem19 studios, still played a part, as did its stellar foreman, Paul Savage, who co-produced the album. “I love Chem 19, I love Paul, we’ve done loads together, but I have to say, having places with views for a change – that was just stunning,” Anderson offers.

The music, too, evokes picturesque terrain, thanks to Catriona McKay’s exquisite harp, Hannah Fisher’s swoon-inducing fiddle, and the thrilling bagpipes of Mairearad Green, alongside KC’s stunning big band ensemble. “I thought it would be great to make a record that was musically Scottish after From Scotland With Love, which wasn’t really that Scottish at all,” he says, with trademark good-natured contrariness. “But I didn’t want this to be a traditional album. Like that Hendrix thing that Mairearad busts out, it totally grabs you.” He plays air bagpipes in the pub.

Green contributes to an anti-wind turbine song called Melin Wynt, named after a Welsh town called windmill, despite there being no windmills there. This clearly appeals to Anderson’s humour. His lyrical modus operandi has long been brilliant, cryptic wordplay – his protagonists and subject matter disguised in allusion, ambiguity and landscape – as best exemplified, perhaps, by You’ve No Clue Do You, the lead single from 2007’s major-label opus, Bombshell. The song unravels itself like a crossword puzzle (you’ll note the word Cluedo within the title, and the drive-rock whodunnit is populated by Miss Scarlet, Professor Plum, et al). It contains one of KC’s most telling lines: “That’s yet another wrong guess.” We can but try.

But on Astronaut Meets Appleman, his words, on occasion, seem more straightforward than usual. Anderson nods. “There was the dislocation of getting out of the usual city and using other instruments with this record, but I also wanted to push myself songwriting wise,” he says. “I wanted to try and get some naivety back. If I’d done this record three years ago, there are lines that I’d never have left like this. I’d have kept on twisting words, I’d have kept on overthinking it. But here, I’ve let that go a bit. Sometimes you just have to take it on the chin and accept that you say daft sh*t.”

It’s hard not to suspect that this is a double-bluff; that such lyrics are deceptively simple – and therefore twice as complex as usual – but Anderson laughs off the suggestion. “I’m not always being cryptic here. And that’s allowed me to try and assert myself as someone who’s not as good as even I sometimes think I am. I can be banal. Everyone can. To allow yourself to be average, that’s what I’m aiming for.”

To what extent has writing for From Scotland With Love – which was largely composed in response to a brief – impacted on Anderson’s new material? “I think writing to rote for From Scotland With Love, and that whole idea of taking myself out of the equation, has freed me up a bit,” he offers. “I’d never done anything like that before. And I like that now, if I want, I can just go with the first couplet, and move on. The song can work anyway.

“The other thing is that taking the cleverness away from the words makes you concentrate on what’s going on with the music a bit more,” he continues. “The songs are getting longer and longer to accommodate everybody. There’s all these instruments. There’s all these singers.” It’s a beautiful record as a result – the unhurried arrangements of Faux Call and Rules of Engagement in particular are breathtaking, and will delight fans of Diamond Mine and From Scotland With Love. But KC is not one to rest. “I actually almost feel I’ve stretched that big band idea as far as I can now,” he says. “I already hear this as a stepping stone to the next thing, even though I don’t know what that is yet.”

The album title similarly grapples with the unknown. “It’s a reality check,” says our DIY rocket man. “It’s an illustration of what my life’s like. This record wouldn’t exist if it wasn’t for emailing WAV files around, and yet it doesn’t matter how much we strive for this digital utopia, there’s always this other thing that bites us in the ass, and it’s real life. It’s people. It’s mistakes. And then there’s the fact that I feel like I’m always reaching for something. I feel like I always have been. And I never get there.”

There’s a song about the moon on Astronaut Meets Appleman. Or rather, there’s a song called Surface, about losing sight of ourselves (and each other); about being eclipsed and taking cover; about seeking light and glimmering hope and finding a way when darkness falls. “It’s a heady descent,” King Creosote sings, and he’s right of course. But the sun also rises.