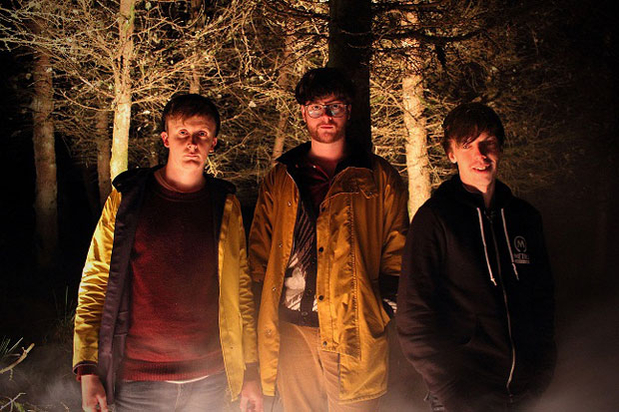 This interview originally ran in The Herald Newspaper (Scotland), on Thursday February 23 2012, under the heading THERE’S NO NEED TO FRET IN A GUITAR-FREE WORLD…

Can you hear that? That’s the sound of Telecasters weeping across the land. And it’s all the fault of Stephen “Steev” Livingstone, of Glasgow electro-rock swashbucklers Errors.

“Guitars just don’t get me as excited as synths do,” he shrugs. “I remember going round to [band-mate] Simon’s house when I was 15 and seeing all these synths and going, ‘This is what I want. I don’t want guitars anymore.’”

Livingstone has since mellowed a propos the humble six-string – indeed, he wields many an axe on Errors’ ace third album, Have Some Faith in Magic – but his rampant favouritism toward the synthesiser endures. “There are way more possibilities, they’re capable of doing so much. Anyone can get a sound out of a synth.”

Perhaps they can, but nobody does it quite like Errors. Formed in 2004 by Livingstone (programming, keys, guitars), school-friend Simon Ward (programming, keys, guitars) and Greg Paterson (guitars) – and joined shortly thereafter by Multiplies / Dananananaykroyd sticksman extraordinaire James Hamilton – the largely-instrumental troupe fuse and upturn the rock and electronica canons. They variously conjure Tangerine Dream, New Order, Depeche Mode, Caribou, Boards of Canada, Aphex Twin and early Simple Minds. They can be insanely good live.

Indeed, it was a nascent gig that bagged them a record deal with Mogwai’s Rock Action imprint. “The band run the label as a kind of democracy, and all of them have got to like something if they want to sign it, but by our fourth show they’d all been to see us and they signed us,” Livingstone recalls. “That doesn’t happen very often – we’re really, really lucky that they happened to be at the early shows. Without that, who knows where we’d be right now.”

As it is, they’re in the midst of a UK tour, on a wave of acclaim for Have Some Faith in Magic, and finding their feet as a three-piece after Paterson’s recent (amicable) departure. Their new material offers more spacious, exploratory electro-rock narratives in comparison to their previous offerings. “Yeah, I think it’s taken us a while to get to a point where we realise that you don’t always need to build stuff up with layers; that breathing space can be a good thing,” Livingstone offers.

“We took a kind of stream-of-consciousness approach this time,” he continues. “We didn’t always want to return to a chorus or whatever. So on The Knock, and to a certain extent on Magna Encarta and Earthscore, every new section is completely different – there’s no going back and there’s no repetition.”

Errors have long maintained that their songs’ evocative titles are incidental – that they bear no great significance or connection to the music; that they are open to interpretation by the listener – but Earthscore is an exception. “The title came first and it ended up influencing the music,” Livingstone explains. “I had this film on in the background, At the Earth’s Core [1976 Victorian sci-fi flick populated by cavemen and telepathic reptiles], and it was just as a background visual, but I started loosely responding to it with the music. I think that’s why Earthscore’s got that kind of tribal feel to it.”

As with their ambiguous titles, the recent introduction of Livingstone’s vocals is unlikely to shed much light on the songs: they are abstract; choral; largely incomprehensible. And while it is tempting to speculate that this new voice serves to reinforce Errors’ manpower following Paterson’s departure, Livingstone views it simply as an addition to their instrumental arsenal.

“Up until recently, I’d always struggled with vocals – I thought vocals could really put you off music,” admits Livingstone. “But then I heard artists like Panda Bear and Atlas Sound, and I started to think, ‘Maybe we could use the vocals in a more interesting way – as an instrument, rather than as a platform for saying anything interesting.’ Because I wouldn’t describe myself as a lyricist, and I think it’d be a bit stupid to start now, trying to claim that that’s what I was all about. Mind you, you never know – maybe on the next record I’ll be claiming I’m a poet,” he laughs.

Has Livingstone’s transition from instrumentalist to occasional vocalist impacted on the group dynamic? “Well, we’d tried little bits before,” he offers. Magna Encarta [originally released on picture-disc last March] had some vocals on it, so by this tour I was used to it,” he says. “But it is weird having to think about my vocal chords – having to looking after them and not abusing them. It’s something I’ll need to think about in the future. I’ll need to look after my voice.”

Does Livingstone know that the Romans swore by leeks for preserving their dulcet tones? “Leeks, really? I didn’t know that. That’s pretty helpful,” says our newfound singer. “I’ll put leeks on the rider.”