The Majestic Ascent of Kid Canaveral 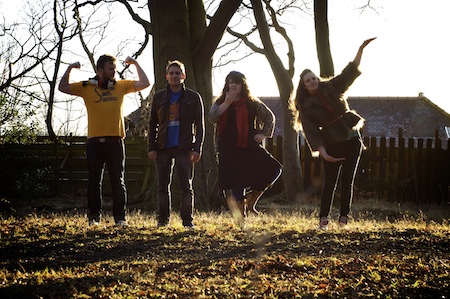 This is the unedited version of the Kid Canaveral feature which ran in The Herald newspaper (Scotland) on Tuesday May 31.

The stars aligned around St Andrews in the summer of 2001. It was then that a quiet-spoken girl from England – let’s call her Kate, because that was her name – arrived in the picturesque Scottish town, to attend its university. She soon met a student of the opposite sex and the rest, as they say, is history.

But let us recap on their tale, for the record. The Kate in question was Kate Lazda and the male she encountered was David MacGregor, and the bond they formed was borne of a love for DIY culture and indie-pop.

While the media spotlight was on St Andrews for monarchic gratification – Prince William and Kate Middleton were in the same year as our alt-rock heroes – MacGregor and Lazda galvanised a parallel, punk-spirited dominion in which prom gowns were usurped by band t-shirts and ballroom basements heaved to the strains of Joy Zipper and KT Tunstall. Our duo booked these acts in their guise as Alternative Music Society honchos, and supported them as members of power-pop troupe Kid Canaveral: a party-starting four-piece who have since amassed a burgeoning fan-base.

“I’d never been in a band before,” recalls guitarist and co-singer / songwriter Lazda of Kid Canaveral’s early days opening for King Creosote (more of whom later) and warming up for Tiffany (yes, that Tiffany). “I think I’d written maybe two songs at that time and now I’ve written eight,” she laughs. (It bears noting that while MacGregor is the group’s principal singer-songwriter, Lazda has an impressive hit rate: pretty much every song she’s ever written – think The Shop Assistants, Marine Girls, Kirsty MacColl – has been released).

“I try not to think about the first few years we were together,” grimaces MacGregor. His modesty belies his rampant promise as a vocalist and songwriter: he possesses an irresistible tendency to fuse vintage indie disco with US alt-rock and anthemic Scottish pop. “We recorded some CDRs when we started in 2004, and if anyone still has a copy…” he buries his head in his hands. Perhaps Prince Wills bought a CDR. Did he ever crowd-surf at their shows? “Eh no, I don’t think so,” MacGregor smiles.

“It was my first band too,” reminisces bassist-vocalist Rose McConnachie, who completes the Kid Canaveral line-up alongside drummer Scott McMaster. (Their original sticksman, Dan Sheehy, left in 2008). “I’ve known David since primary school in Glasgow, and I went to St Andrews too. One day David said, ‘Rose, you can play guitar, can’t you?’ And I said, ‘well, yeah, kind of’, and he said, ‘well you can probably play the bass then,’” she laughs. “The funny thing is, I love it now. I’m much better at bass than I ever was at the guitar.”

The band graduated in the mid-2000s. MacGregor, McConnachie and Sheehy moved to Edinburgh and moved in together, (“It was a bit like the Monkees, except none of us liked each other,” jokes MacGregor), while Lazda settled in Anstruther. On occasion, she assisted Fence Records – the regal Fife-based DIY enterprise helmed by King Creosote, alias Kenny Anderson, and The Pictish Trail, aka fellow St Andrews alumnus Johnny Lynch. (The band had befriended Lynch at university, where he preceded them as leader of the Alternative Music Society, and performed under the imperial rock pseudonym Prince William’s Golf Band).

Kid Canaveral started their own label, Straight to Video, in 2007, and self-released a series of ace cult-pop seven-inches, CDs and cassettes (most of which bore a striking visual identity thanks to Rose’s artist sister, Eve), but their casual Fence alliance has proven symbiotic and enduring. They’ve long been a highlight of Fence live events – not least at last year’s brilliant Away Game on the Isle of Eigg and last month’s sell-out (and typically sublime) Homegame festival in Fife – and they toured the US with King Creosote in March. Kid Canaveral played some American dates, starred at Texas industry showcase South by Southwest, and performed a few shows as King Creosote’s backing band. He in turn plays squeezebox on the b-side of their forthcoming single, And Another Thing. (Said b-side, incidentally, is a raucous cover of Anderson’s ungratified lament, Missionary).

It is fitting, then, that Kid Canaveral have now “officially” signed to Fence: the label is set to re-release their 2010 debut album, Shouting At Wildlife, on CD and vinyl in July. It was originally issued on CD via Straight to Video, and became such a word-of-mouth hit that it was Edinburgh record shop Avalanche’s best-selling album of last year.

“I can’t really believe how the past twelve months have gone,” reflects MacGregor. “It’s been incredible. I mean, selling out shows in Edinburgh, and Glasgow, and London – that’s just insane – and having such a positive reaction to our album was brilliant. I almost got that Avalanche chart on a t-shirt,” he laughs. And you think: there should not be room on a t-shirt to detail the feats of Kid Canaveral.

1 Response to The Majestic Ascent of Kid Canaveral